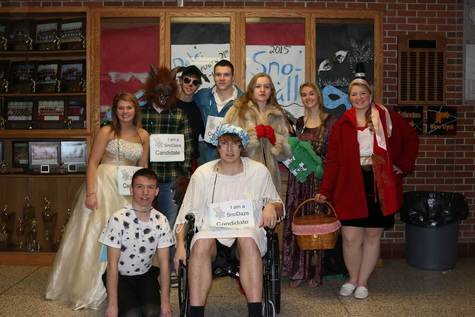 The Sno Daze candidates participated in "dress-up days" during the week prior to coronation. Pictured is the "Disney couples" day.
By Eddy Simonson
Posted March 2, 2015

You’ll be sharing the hallways of Aitkin High School with royalty as a result of the Sno Daze Coronation on Tuesday, February 17. The respective Sno Daze King and Queen turned out to be Alan Bast and Mallory Milbradt. They were crowned during eighth hour in the auditorium.

When Jeremy Paulbeck, fellow candidate, was asked what was going through his mind during the crowning, he responded, “that I was really tired, and I was going to eat a lot of pizza when I got home.”

Be sure to congratulate the winners and the participants when you see them in the hallways!
Powered by