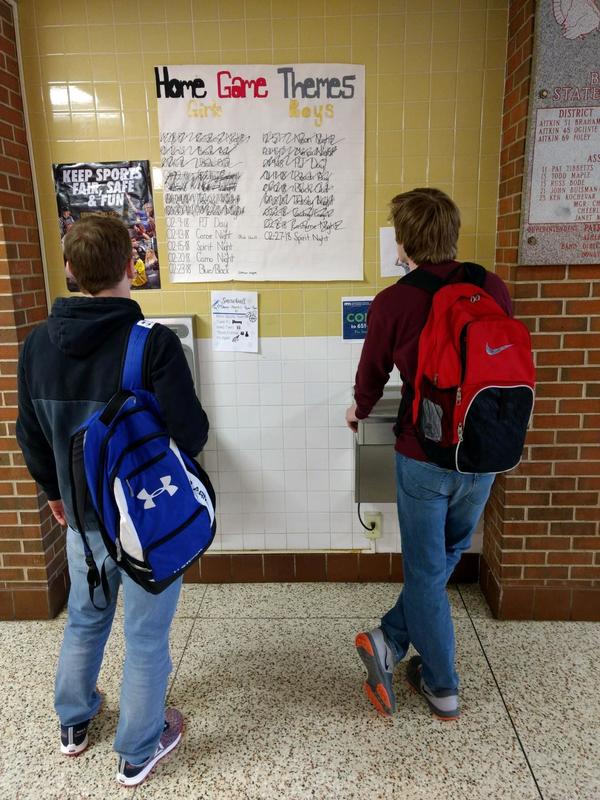 Aitkin High School Principal Paul Karelis said his number one concern is the safety of the school. “If a student is upset with a teacher or a friend, they (backpacks) can carry articles that could be used to hurt someone,” he said. For Karelis, the threat of backpacks being used to transport weapons is not a theoretical one. At his previous school, a student did bring a weapon to the classroom in a backpack.

School administration also believes that backpacks take up a lot of space in classrooms. Before the ban, many teachers were tripping over the backpacks, Karelis said. In addition to transporting weapons and illegal articles, banning backpacks also prevents other distractions like food from entering the classroom, Karelis said.

“Backpacks also take too much space,” echoed Aitkin teacher Teri Larson, who is in favor of the ban. “I was always tripping over them.”

The students’ argument to keep their backpacks is about convenience. They would like to carry more useful things to class, but they sometimes forget what they might need for class. “We do not have enough time because some people’s lockers are across the entire school, so it takes more time to go to our class and get a potential tardy,‘’ Aitkin senior Devon Modtland said. Many students believe that they will show up in class earlier if they have backpacks. If they do not need to visit their lockers there is less risk of being late. “I try to keep the things I carry between class at the maximum of two, but I would like to carry more for my classes,” Aitkin senior Saige Arnold said.

“I do not think students need their backpacks every time at school,” Aitkin social studies teacher Scott Miller said. “But I am for students’ freedom and to make their life better, so I’m generally in favor of things like that as long it’s not disturbing the school.”

“I think it is a good thing that students cannot bring backpacks between classes for safety reasons,” Larson said. Before the policy was implemented, a student brought a scissors into her classroom and was aggressive with it.

​Karelis said he has no intention of changing the backpack policy.
Powered by