Back stairway open for student use 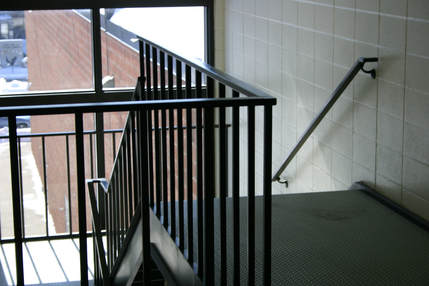 After coming back from Thanksgiving break, staff and students were surprised to see the second set of stairways had reopened here at Aitkin High School. After being built in the 1970s, the stairs were finally in use.

The stairs were originally built for emergency exits only and students were not able to use them. Eventually the school needed more storage area, so they started storing things such as extra desks and chairs that weren’t being used in that hallway. According to Gloria Curtiss, the chairs and desks were moved into a shed on new land that the school had purchased last school year.

Now being open for use, students are really taking advantage of the stairways. After asking a few people about being able to use the stairs there were a lot of positive responses.

Twelfth-grader Dylan Gustin said, “I like the new stairways because they’re convenient, they have nice big windows and you can get some vitamin D.” Another student, tenth-grader Kady Fastner, said, “These stairs are really nice because they help you get to classes faster, especially if the class that you’re heading to is on the same side as the previous class that you were coming from.”

Seeing students take advantage of this new option we have here at Aitkin High School seems to have a positive impact.