Aitkin spins around the competition 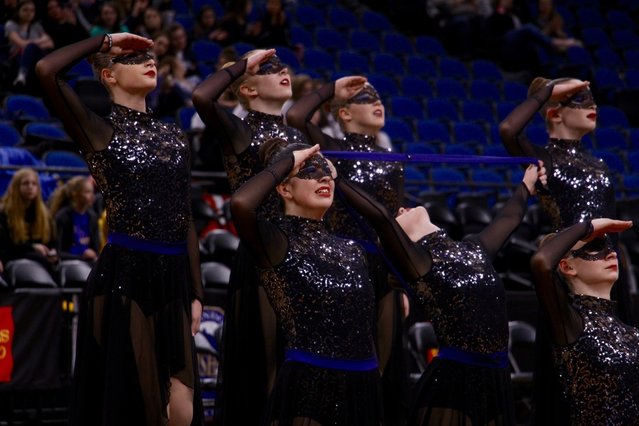 The preliminary round was full of enthusiasm from all the teams that had qualified from their sections, including our All Starz. From the Sound of Silence to Turned to Stone, the music was just one tool that aided in the captivating performances. Even though the competition was tough, the All Starz came out on top. But, Frazee was following them closely, like they have been the last couple of years. “They kind of came out of nowhere,” said senior Justice Ramos. “Everyone is nice and we always say good luck when we see them, but there is a silent tension between us and them.”

Going into finals sophomore Jayden Cline had these thoughts running through her head, “I kept reminding myself it’s not as scary as I think it is and to remember just to dance. Dance for the people and remember why and who we are dancing for.” The All Stars went out and had a stunning performance with minimal mistakes. The girls walked off the floor confident in what they had just done. Aitkin was set to go last, but earlier one of the Frazee Fly Girls had an asthma attack due to a bad case a pneumonia. But, even with that second chance for Frazee, Aitkin pulled ahead with the win. “All my fear was gone,” said senior Abby Bobenmoyer once it was announced that Frazee took second. “I couldn’t have been more proud of the team. Mya Conway and I were so overwhelmed we could barely stand.” However, it wasn’t just Mya and Abby that were moved by this routine.

Head Coach Lisa Roth addressed the crowd of friends and family gathered at the high school Sunday Feb. 19th at the team’s welcome home. She relayed a message that she and the other coaches had received on Friday when they returned to their room. A note was posted on their door from a daughter of a retired Minneapolis police officer thanking them for the dedication of their song, In Honor of Badge 203, for fallen police officer Steve Sandberg. Sandberg was from our hometown of Aitkin and passed in the line of duty Fall of 2015. The Sandberg family, the town, and many members of the police force felt this loss, but this dance was not just a reminder of the pain we felt. It is a beacon of light in which his wife, Kristi Sandberg, hopes will inspire all of his memory.
​
“I have been so humbled and so honored from the respect, dignity, and the compassion that is showed every single time that the jazz girls take the floor,” said Kristi while giving an impromptu speech after Coach Roth. “I feel like you just laid it all out every time you went out. I believe that one of the biggest accomplishments you achieved was showing how strong and how powerful a small community can be, both in great times and the most tragic of times. You girls gave me reassurance that Steve will not only go on to live on in my heart forever.” Holding back tears she continued, “He’s going to live in so many others.”