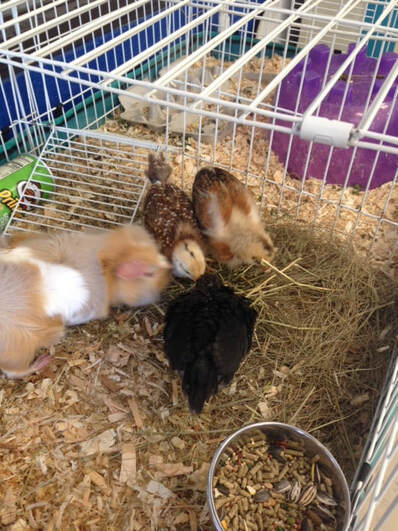 On Jan. 25, the Agriculture department welcomed two baby chicks into the world and five days later welcomed one additional chick. Mr. Erik Heimark had originally decided to hatch the chicks for his Animal Science class for their poultry unit. Unfortunately, the fertilized eggs would not be here in time before the quarter ended. Instead, they are used for teaching responsibility to Mr. Heimark’s other classes such as Companion Animals.

Mr. Heimark had received 18 fertilized chicken eggs but only three hatched. The chickens are a mix of different breeds such as Rhode Island Red, Black Australorp and more. Mr. Heimark’s class, Companion Animals, is in charge of taking care of the chicks; making sure that they are fed and their cage is kept clean.

Currently the chicks are living with the class guinea pig, Nye, due to them having a tendency to hop out of their cage. Over the weekend, Mr. Heimark comes in to check up on the chicks and leaves the radio running with plenty of food and water to make them right at home. Once the school year is finished or when the chicks get too big, whichever comes first, the chicks will go to live on Mr. Heimarks farm.
Powered by