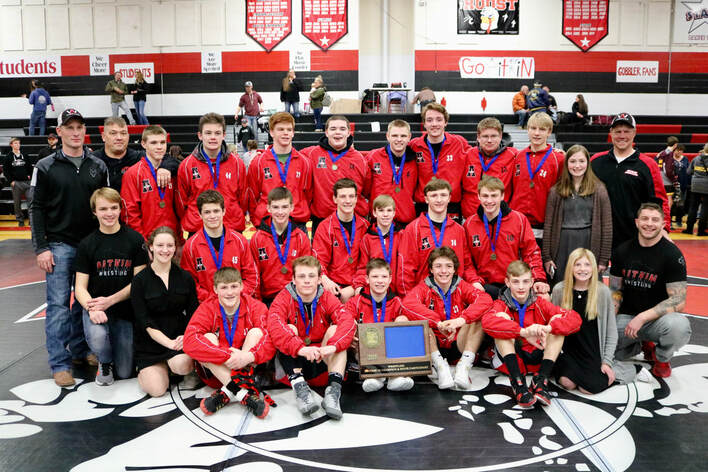 “We are all so proud of each other and it will be something all of us will talk about years to come,” Captain Austin Espeseth said after winning the Section 7A championship.

On Saturday the wrestling team hosted team sections here in Aitkin. There were 10 teams battling to win a trip to the state tournament.

The first team that Aitkin wrestled was Rush City. During that match, they had plenty of pins to win that match. Marshall Larson, Walker Jones, Carson Kullhem, Nathan Rom, Luke Pelarski, Tyler Spolarich, Jack Workman and Craig Ashton all had pins to win by a score of 73 to 4.

The next match Aitkin wrestled Deer River. Quin Miller won his match with a pin, also earning his 75th varsity win. Miller wasn’t the only one who had a pin that match as Nathan Rom, Jack Gravelle, Tyler Decent and Jack Workman also went on to pin their opponents. Carter Endrizzi also won his match with a technical fall, having 15 more points than his opponent. The Gobblers won that match 59-15.

Aitkin’s final match against Royalton was a barn burner with the wrestlers knowing that if we lost a match we could not get pinned or give up any bonus points. We started by winning every other weight class. Then Jack Gravelle, Luke Pelarksi, Cater Endrizzi, Tyler Spolarich and Jack Workman all came up with big wins. Going into the 220 weight class and only being ahead by 12 points, no one could give up a pin. With that being said Cody Snyder was down 12-3 going in the third period of his match and he chose the neutral position. He wanted to leave everything that he had on the mat, and didn’t when he threw his opponent, Matt Kasella, to his back for 40 seconds before recording a pin. Having Snyder win his match sealed the deal for a trip to the state tournament for the first time in 11 years.
​
Aitkin head coach Larry Liljenquist said the team needs to focus going into the state tournament. “We need to be a little grittier,” he said. “The competition is going to step up. That said we need to show more grit and be tougher.”
Powered by