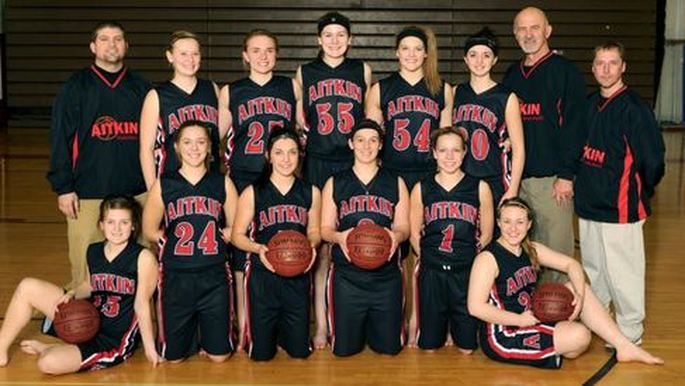 Last Friday night the girls came away with a win against Hinckley-Finlayson by a score of 66-36. For most of the first half the Gobblers were behind, but took the lead ending the first half with a score of 28-22. They kicked it into high gear to end the game with a 30 point lead.

Coach Williams was very pleased with the second half defensively, but the first half, mostly the first 6-8 minutes, could have used more speed, efficiency, and intensity.

Maggi Fellerman and Naomi Lane came off of the bench to score 14 and 12 points each. Lisa Anderson and Brooke Miller each scored 11 points, while Taylor Ehnstrom added 10 points. The girls improve to 18-4 on the season.

The girls basketball team traveled to Pequot Lakes Tuesday night and returned home with their first loss of February. The final score was 68-54. The girls came out strong and led 29-28 at the half. However, foul troubles and a stretch of cold shooting were too much for girls in the second half.

Leading the way was Taylor Ehnstrom with a career high 22 points. Lisa Anderson added 9 points to our game. The girls are now 18-5 for the season and travel to Rush City Friday in a huge Great River Conference match up. Both teams are 13-1 in the conference and fighting for the GRC title this season.
Powered by