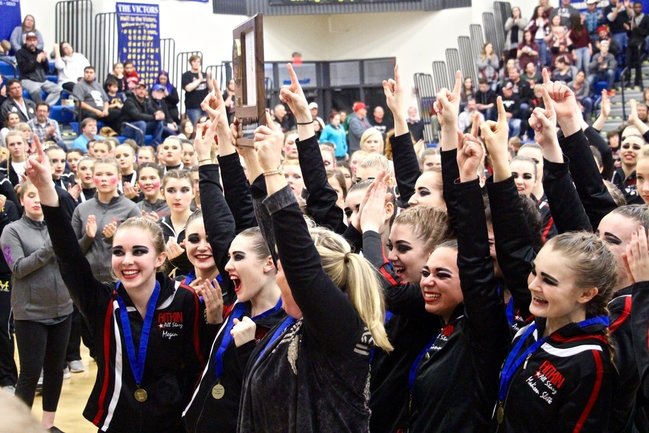 The Aitkin All Starz celebrated their section sweep in Wadena.
By Taylor Crotty
Published Feb. 15, 2017

The All Starz took home the hardware from the 2017 Section 4A competition Feb. 4 in Wadena.

This year's Kick team, our very own band of pirates, used inspiration from the popular movie series Pirates of the Caribbean as they danced to the song Curse of the Black Pearl. They took the floor facing 13 other hopeful teams ranging from Crosby-Ironton, Wadena, Pierz, and rivals the Frazee Fly Girls. You could imagine how nervous the team must have felt knowing they could be dancing their last routine of the season, but for senior captain Mya Conway, this wasn’t the case. “I wasn’t very stressed because I was confident in the team. My biggest worry was that the gym wasn’t long enough to fit all of our girls.” The other hopefuls were no match for the All Starz who took first scoring 81.4 overall and having high points in many categories, some of which are: Difficulty of skills and kicks, visual effect and creativity, and routine effectiveness. This high score not only got them first in sections, but a ticket to state as well.

When the Jazz team strode onto the floor you could feel the emotion all around you. Not only from the large following of parents and fans from Aitkin, but also the other town’s supporters who know what this routine stands for. The dance, In Honor of Badge 203, was dedicated to fallen officer Steven Sandberg who passed away in the line of duty in October of 2015. The song, The Sound of Silence, and the dance have been met with positive reviews and many emotions. It wasn’t just the technical difficulty of the formations, transitions, and skills that won over the judges, but the heart and soul the girls danced with.

The All Starz performed well enough to just grab that first place win over the Fly Girls, beating them by 1.2 points. “It was mostly relieving,” said another senior captain Shelly Stephani when asked how she reacted to Frazee taking second. “We were all hugging really tight and we could finally relax and breath again.” They couldn’t hide their emotions receiving their medals as some had tears of joy streaming while others had smiles stretching ear to ear. Both Stephani and Conway agreed that the best part of sections was when they were finally able to hold up that plaque and surround Head Coach Lisa Roth and cheer for their victory.

This Thursday the girls will be heading down to the Target Center to prepare for the state tournament. Jazz will be competing Friday and Kick will be on Saturday. Both teams have been preparing for the last two weeks to finalize and perfect the routines. Coach Roth said they have been focusing on techniques, being sharp, and working on presentation. “The biggest challenge at state will be to contain our nerves and stay focused on giving our best performance,” Roth said. The captains both said they can’t wait to be able to step out on the floor and dance their final routines to re-experience the feeling of having so many people support and cheer them on. They also both agreed that the best part of state is walking off the floor knowing you did your best.
Powered by