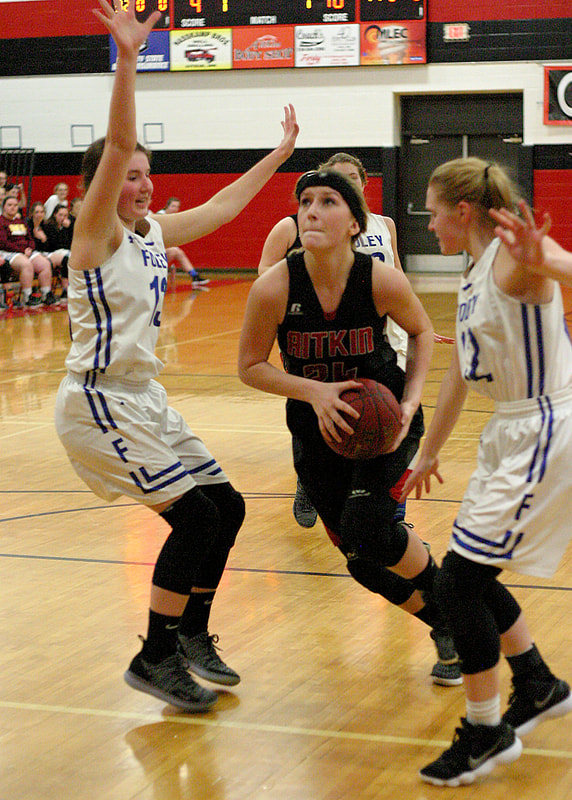 “Dream, Believe, Achieve” was the Aitkin Girls Basketball team’s motto for the game on Monday against the Foley Falcons. “Going into the game I expect to compete and win,” coach Rob Williams said. The Lady Gobblers had a lead late in the game 35-32 playing very good defense, but cold shooting and sloppy turnovers saw the game slip through their fingers down the stretch. The lady's ended the game with a tough loss 52-43.

“Going into Tuesday's game, my hope is that the ladies will be able to build and learn from their mistakes,” coach Williams said. And that's just what the ladies did.

On Tuesday in Mora against the Mustangs, the Ladies built off their mistakes and won the game 53-33. The Ladies played amazing defense and held Mora to 11 points in the first half while the Gobblers scored 31. Kaija Davies led the Aitkin Gobblers with a double-double with 11 rebounds, 18 points and 6 assists. Ramsey Moe tallied 13 points, 5 steals and 4 assists.  Ally Ehnstrom came off the bench adding 8 points and 4 assists by working hard on both defense and offense. Jillian McDonald went out on the floor and gave her all with 6 steals and 6 points. The Ladies worked hard and their dedication and improvement showed during that game. 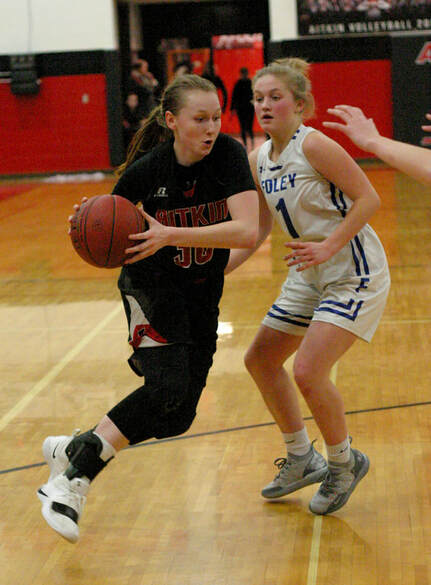 Ramsey Moe looks to score against Foley Monday.
The Gobblers record is now 13-9. Pequot Lakes is currently one game ahead of the Gobblers in the race for the Conference Championship. The Lady Gobblers will travel to Pequot Lakes Friday to play against the Patriots. They have three games left until sections start: Friday away against Pequot Lakes, Tuesday at Detroit Lakes and Feb. 22 at home against Staples-Motley.

The Lady Gobblers love having the support from the parents, students, and fans. The crowds are a big part of the game and not only do the ladies play for themselves and the team, but they also play for their fans and family. Having the support and enthusiasm of the crowd impacts the girls in a way that makes them want to play harder and work harder to win the game. The Ladies appreciate their fans support and dedication towards the team. They hope they continue to see the support as the regular season come to an end and as sections begin.