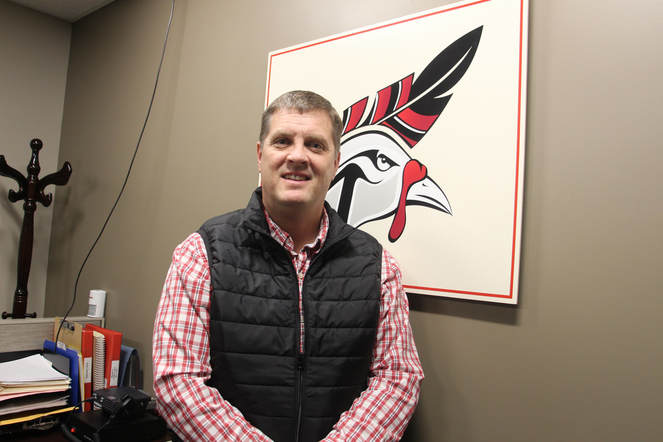 A fresh face has been spotted in the halls this school year. As we all know, a new superintendent, Mr. Kelvington, has been employed here in Aitkin. I set out to interview him and give people better a insight of the man who’s in charge of our school. These are my questions and his answers.

CE: So, for starters, where are you from?

BK: I’m from Olivia Minnesota, which is down in Southwestern Minnesota.

BK: Growing up in Olivia? Great. It was small town living, just like it is here.

CE:Have you ever lived in a city?

BK:I did live in Sioux Falls for a couple of years, but I have chosen to live in mostly small towns.

CE:Did you go to college there?

BK:No, I went to Southwest State University in Marshall. It’s another smaller community.

BK: I had a great time. Got an education degree, met my wife, got to do some wrestling on the side.

CE: Was wrestling the only sport you did throughout high school and college?

BK: In high school I played football, wrestled and played golf, then in college I just wrestled.

CE: So after college, what did you do?

BK: We moved to South Dakota where my wife and I taught [Phy Ed and Social Studies] for ten years, had our kids, then moved to Minnesota in 2001, where I took my first principal’s job in Wrenville County West.

CE: What made you want to be a teacher?

BK: I’ve always wanted to work with kids, whether it be in the classroom or in the arena coaching.

CE: What grades did you teach?

BK: I have taught every grade level except for ninth and tenth. I taught K-6 Phy Ed and 7th, 8th, 11th and 12th Social Studies.

CE: What made you want to teach Phy Ed and Social Studies?

CE: As a huge history buff myself, what do you find interesting about history?

CE: So, tell me more about your job in Wrenville.

BK: That was about ten miles from where I grew up in Olivia, so it was like going back home. It was a learning experience, being brand new at that. It was really a great place to start principalship.

CE: What did you do after that?

BK: My family and I moved to Foley in 2006, where I was the middle school principal for eleven years.

CE: Was that before coming here?

CE: Why did you decide to come to Aitkin?

BK:I’d been looking for a superintendent job with Aitkin’s school size and location. Their pride, their desire to be a good school and a good community just drew me here.

CE: What was your first impression upon arriving in Aitkin?

CE: So what do you think of Aitkin after living here for a little while?

CE: What do you do as a superintendent? What does that entail?

BK: Well, that’s a really good question. Being new, I think I find something new every day, so I’m really just getting to know what the role is. That’s what’s very unique about being in education, is that something new comes up every day that we can learn from and improve upon.

CE: If you were doing something different with your life, what would it be?

BK: If I could’ve chosen a new career path, I think I would’ve been a professional golfer, or working in the golf industry. It would have been something outdoors.

CE: Well with your love of sports and the outdoors, I think you’ll feel right at home here. Thank you for you time.

After interviewing him, I think Mr. Kelvington seems to be a decent person. I’d say he was a great choice for superintendent. With his small-town background, his passion for education and love of the outdoors, I’m sure most people will agree that he fits right in here.
Powered by