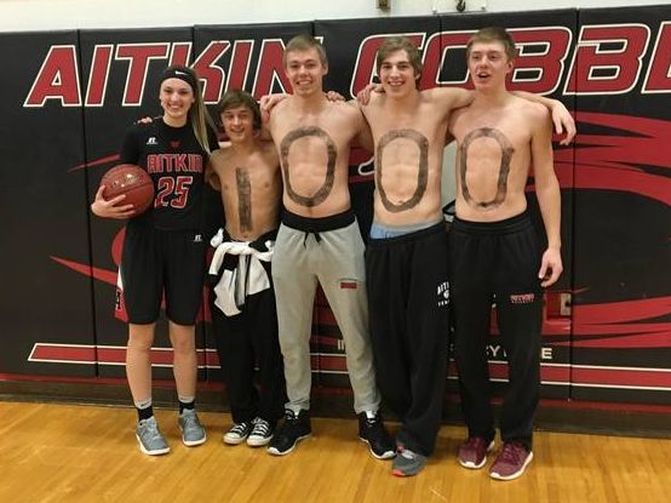 Maggi Fellerman scored her 1,000th point against Detroit Lakes on Feb. 20. Maggi is the only senior on the team, she’s blonde, very tall, and her number is 25.

Fellerman said she felt overwhelmed after hitting the mark. “I’ve never felt so special,” she said, referring to the crowd cheering specifically for her.

She also said that she was surprised that she got her 1,000th point. “At the beginning of the season, my coach said I was close,” Fellerman said. “He just didn’t say how close.”

Fellerman said she felt the pressure of reaching the milestone. “Yeah, I was scared I wasn’t going to get it,” she said. “I was worried that I would be a let down.” She definitely did not let any of us down.

Aitkin head coach Rob Williams was impressed with Fellerman’s feat, especially within a system that values a team approach.

“Tuesday night was such a great evening,” Williams said. “It certainly was 'Maggi Night' as she was our only senior this year. Her reaching the 1,000 point mark is a great career accomplishment for her. Any time a girl is able to reach that mark in our program to me it is a little more significant because we really strive for team balance and chemistry. She was able to reach that goal while playing within a system that promotes team play. I am extremely proud of her and excited she was able attain this honor.”
Powered by